In 1851, The Great Exhibition was held in Hyde Park, London. The exhibition showcased what was considered to be the best of Victorian design, featuring everything from intricately carved tables and cupboards to elaborately ornamented vases and forks. This sort of design is interesting to me because it showcased the most extreme use of decoration in the design of goods meant for everyday use, and it’s this sort of design that triggered a complete reversal of how we view and employ – or avoid – ornament in modern design.

There is a catalogue of goods showcased at the exhibition, which Google has been very kind to scan for us free of charge (you can view it here). It’s a great big book, but it does contain a lot of detailed sketches which are worth taking a look at. I’d like to share some of the more elaborate ones here with you so you can see how ornament was used in Victorian design – or at least in the more extreme designs showcased at The Great Exhibition. Here’s a sketch of a set of flagons, a vase, and a goblet: 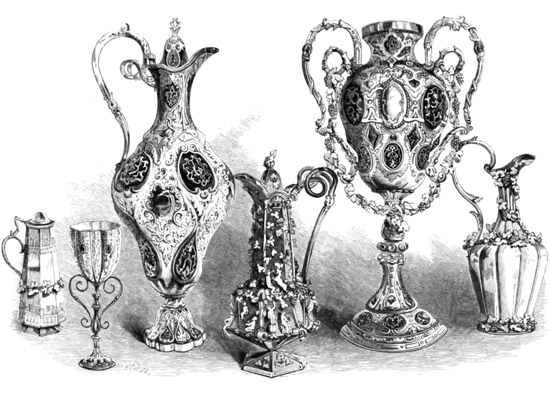 The ornament permeates throughout the whole construction. Indeed, the initial form of the object is used as empty ground for the ornament, so that almost every space is decorated. Here’s a sketch of a silver inkstand: 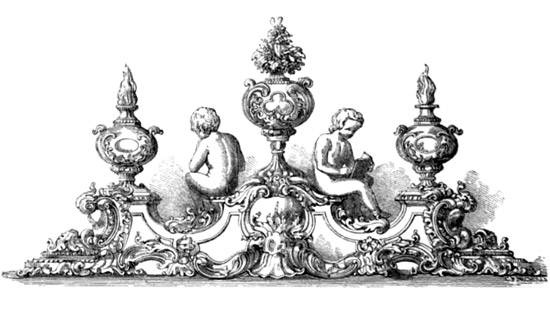 When you examine this, note the leaf shaped or floral elements used throughout most of these designs that try and bring the spirit of nature to the work. What’s interesting about them is that they’re not very realistic – that is, they don’t try to re-create a real plant, but rather try to make it look like the decoration is natural – a contrast to that of Gothic design which has a deeper respect and knowledge of nature and so tends to recreate forms of flowers and leaves with much greater accuracy. 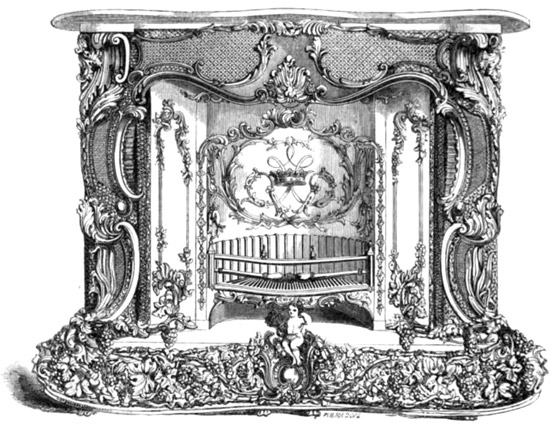 The above is a sketch of a stove. This is one of the more garish examples, with so much ornament tacked on it looks like it’s overflowing. Here’s an illustration of a chess table, and here again note the faux leaves used to form the pattern around the playing board: 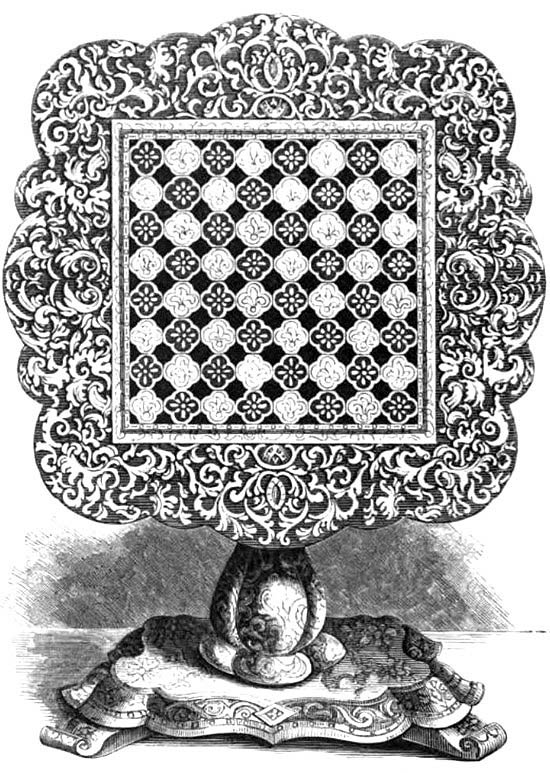 On the right is a sketch of a fish cleaver and a fork. As above, the ornament permeates the design so much that the structure of the work appears to be made of ornament. What this sort of design tries to achieve is a sense of awe as you look upon the flood of intricately carved details and decorations. All of the Renaissance symbols of luxury and class are thrown at the work and then multiplied tenfold in an attempt to achieve a feeling of grandeur and magnificence. But this eagerness to use ornament at every point also pushes the work to an extreme – it becomes garish and bloated.

The products at the exhibition attracted some criticism from notable design critics including Richard Redgrave, Ralph Nicholson Wornum and Owen Jones. The young William Morris has also visited the exhibition and was aghast at what he saw. Nevertheless, this sort of design continued on for many years, and it was only at the start of the last century that we see the beginning of our journey to the other extreme – the banishment of all ornament – that we can see around us in modern design. In The Decorative Art of Today, published in 1925, Le Corbusier, who is considered to be one of the pioneers of modern architecture, wrote the following attack on the sort of design we’ve just seen above:

Trash is always abundantly decorated; the luxury object is well-made, neat and clean, pure and healthy, and its bareness reveals the quality of its manufacture. It is to industry that we owe the reversal in this state of affairs: a cast-iron stove overflowing with decoration costs less than a plain one; amidst the surging leaf patterns flaws in the cast cannot be seen.

It is a strong rejection of ornament, but Le Corbusier’s stance is easy to understand after having seen the sort of design that was showcased at The Great Exhibition. In their quest for splendor and opulence, the designers have taken elements of Renaissance art to an extreme, adding more and more additions to their work until it overflowed with embellishments and decorations. The original shape and purpose of the product is forgotten, and the eye begins to lose the grace and beauty of the individual details in the ocean of ornament.