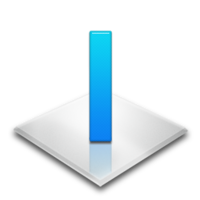 Recently a new genre of writing apps has appeared: the stripped down, minimal writer. These apps don’t have any fancy WYSIWIG controls for formatting and laying out text. In fact they specifically eliminate all of this to leave you with just enough tools to focus on the writing, which in most cases means giving you a blank screen with a blinking text cursor.

For Mac these include WriteRoom, Byword, Ommwriter, and now IA Writer. I’ve used and liked WriteRoom, but oftentimes I’ve found myself going back to TextEdit, a text editing app bundled with Mac OS X. TextEdit is a very basic tool that allows minimal formatting, much like WordPad on Windows, but it also lets you hide most of the formatting tools and work in plain text, giving you a minimalist writing tool.

My only real problem with TextEdit were the nonexistent margins–you can view the document in a page layout mode, which has margins, or a simple text mode, which loses the margins to the point where the text almost touches the side of the window. For some reason I couldn’t force the app to stay in the page layout mode, and working without a healthy margin on the side of the page is uncomfortable. But at the end of the day, this isn’t a huge issue, so I stuck with TextEdit for most of my writing.

When IA Writer came out it generated a bit of buzz, and its features and introduction video caught my eye. By design it seems to be the perfect editor. It is much like my stripped down version of TextEdit, only better. It gives you word count and reading times on demand, it has a clever “focus” mode, it has a full-screen mode, and best of all it has a healthy margin on the side of the page. There’s no scrollbars–it uses the iOS style scrollbar that hides when not in use–and when you start typing all text info fade away, leaving you with just the text.

But on top of all this, IA Writer actually uses Markdown to manage formatting. Markdown is an inline formatting syntax often used on the Web instead of heavy WYSIWIG interfaces, but it’s also used by the blogging engine that powers this blog, toto. This means when I write posts using IA Writer I not only get to use Markdown to manage the formatting of the final document, I actually get instant visual feedback on this formatting (bullet points, headlines, emphasis etc.)–this is all plain text mind you, not a rich text file.

One other interesting thing about IA Writer is that true to its minimalist design the app doesn’t let you customize anything. There’s no Preferences window, so if you don’t like the way the app works, there’s nothing you can do about it. This includes the font selection, the font size and colors. I’m usually picky about these things, tweaking the font and colors till I arrive at a comfortable combination. I was pleasantly surprised to find IA Writer’s selection on this front pretty much perfect.

Here’s a snapshot (in focus mode, which highlights the current sentence)–font looks large here but bear in mind the app will be the main thing on the screen, or used in full-screen (click to see full IA Writer window):

The font used is Nitti Light, a clean and clear monospaced font, and the line-height, as well as paragraph spacing, is nice and wide. The font size large, making it ideal for full screen editing, as well as for new higher resolution screens that make everything on the screen smaller due to their high PPI. Page width is also set at around 65 characters, which again feels spot on. The background color used is light gray, with a very, very subtle lines and noise texture over it. The texture is hardly noticeable but actually works very well. This almost makes the app feel more analog than digital, bringing the experience closer to using a typewriter.

IA Writer for Mac costs $17.99 at the App Store. The first reaction is: $18 for such a minimal app? But then you think about how often it is you use your text editor. If you use it regularly, then how much would you value the perfect minimalist editor, an app that takes your tool and refines its every little aspect, making writing more pleasurable? I decided to give the app a shot, and don’t regret paying the price one bit–indeed, I’d easily pay more for it now that I’ve tried it.

It’s not very often that I’m totally satisfied with a piece of software, but in this case it almost feels like the developers have read my mind and given me exactly what I wanted. If you’re looking for a minimalist writing app, I highly recommend IA Writer. It’s not much different to the other apps I’ve listed at the start of the post, but the execution is better, to the point it just “feels right” out of the box–something I seldom see in the apps I use.