In the chapter on Byzantine palaces in The Stones of Venice, John Ruskin measured the distances between the shafts of Fondaco dei Turchi, as well as the few other remaining Byzantine buildings he could locate in Venice. What he discovered was that the arches from the same group were not of even width. This was not an error of measurement on the part of the builders, but a thoughtful decision to harmonize the spacing of the shafts so that they would sit better next to the narrower groups on their sides. Here is Ruskin’s sketch of Fondaco dei Turchi: 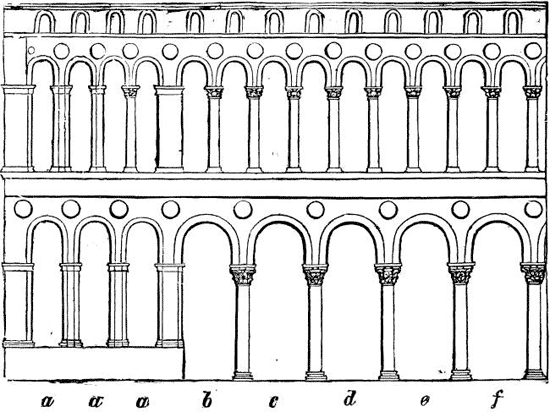 Here are the dimensions for the lower set of arches that Ruskin has measured shaft to shaft (indicated by the letters a-f on the sketch):

Now, intervals labelled a are all the same, but the larger arches on the right vary. The longest distance is 8 feet and 1 inch, measured at interval d and onwards, but the builder has decided that this would clash with the narrower columns on the left, so a gradation is introduced in b and c. This is not specific to this particular building; at all the other locations Ruskin notes similar gradations to smooth out the spacing of the columns as they get closer to the narrower groups on their flanks. The builders were not satisfied with an even spacing of a rigid framework and instead let their primal creative energies guide their systematic constructions towards something less mathematical, something more organic.

In modern design there is a drive to develop frameworks to help you shape your work, for example, creating a set vertical rhythm on a page to set your text against, or aligning elements on the page to a grid. Such methods have been developed over a very long time, and they are used because they are highly effective at creating work that is pleasing to the eye. But these systems also relieve the designer of their creative responsibilities to exercise their own judgements – be it judgements on size and alignment or contrast and color. The system now makes the call for you, and your responsibility becomes figuring out how best to adhere to its rules.

But the system itself is a judgement call – a call made either by you or somebody else before you. Straying aside will mean you will not achieve mathematical perfection, but is that what we’re really after? After all, nature never tends to follow equal measurements, choosing instead subtle gradations and variations – variations that are at times difficult for the eye to see but nevertheless influence our perception of its beauty. The Byzantine craftsman introduced symmetrical irregularities into his work that broke the even flow, but those irregularities were his way of improving on the work by exercising his own creative judgment, a way of making subtle refinements to the rigid structure of the underlying framework. The framework was used as a tool to help construct the foundation, but the craftsman was never bound by its rules, respecting his own creative judgement enough to introduce subtle variations that help contribute to the beauty of the finished work.